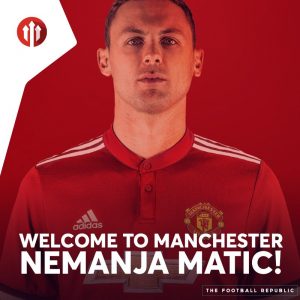 Manchester United have confirmed the  signing of Nemanja Matic from Chelsea for £40m on a three-year deal.

United manager Jose Mourinho described Matic as a “team player” who has “everything we want in a footballer; loyalty, consistency, ambition”.

Matic said he was “delighted” to be joining at “an exciting time”.

The Serbia midfielder added: “To work with Jose Mourinho once again was an opportunity I couldn’t turn down.

“I have enjoyed my time at Chelsea and would like to thank the club and the fans for their support. I cannot wait to meet my new team-mates and to start training with them.”