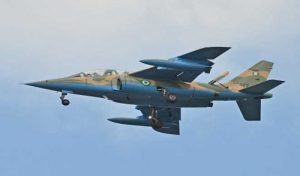 A Pilot of the Nigerian Air Force (NAF) Air Beetle was killed in a  crash in Kaduna State while he was on a mission , the statement was released by the director of Public Relations and Information, NAF Headquarters, Air Commodore Olatokunbo Adesanya, disclosed this in a statement in Abuja.

According to Adesanya, the only soul on board the aircraft, one of NAF’s experienced instructor pilots, was unfortunately lost during the mishap.

The director said that the cause of the incident had not been ascertained.

Adesanya added that the Chief of Air Staff , (CAS) , Air Marshal Sadique Abubakar, has immediately directed the constitution of a board of inquiry to determine the immediate and remote causes of the crash.

“The unfortunate incident is a tragic reminder of the hazards associated with the flying profession.

“The CAS and the entire NAF family commiserate with the relatives of the late instructor pilot,” he said.