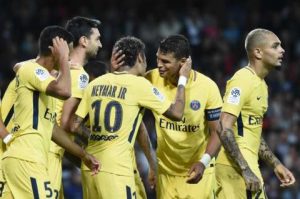 The World’s most expensive player, Neymar scores on Sunday on PSG debut after £200m world record move from Barcelona.

The goal came for the Brazilian after 82 minutes of play as PSG thrash Guingamp 3-0 away from home.

Neymar had headed the ball out to Edinson Cavani, who unselfishly squares the ball back to the Brazilian to tap into an empty net. Cavani usually would have gone alone from there.

Ikoko’s 52 minutes own goal had given PSG the lead, while Cavani scored the second goal in the 62nd minute of the match.