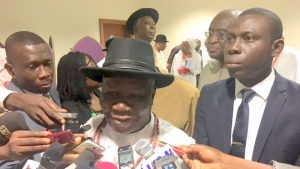 Niger Delta leaders have withdrawn the ultimatum they gave the Nigerian government to accede to their 16-point demand or face withdrawal from ongoing peace efforts.

The was  announced by an elder statesman, Edwin Clark, shortly after he led the Pan Niger Delta Front, PANDEF, to a meeting with Acting President Yemi Osinbajo at the presidential villa Abuja.

Briefing State House correspondents, Mr. Clark also said they had an excellent meeting with Mr. Osinbajo, adding “the discussion was very honest, truthful and forthright. We are very very satisfied”.

Mr. Clark, who had on Monday given the Federal Government up to November 1, 2017 to meet the 16-point demand made by PANDEF on November 1, 2016, said after the meeting that there is “no more ultimatum. We agreed on many things. They came with their own address, the ministers all spoke, presented their cases and at the end, the Acting President rounded it up.

“We saw his genuineness and forthrightness; he is a gentleman. We are satisfied. We have agreed to work together and the issue of dialogue must take place,” he said.

Mr. Clark said the people of Niger Delta should know that their leaders were able to discuss the regions’ 16-point agenda as well as “government’s 20-point agenda and we are all satisfied. We all agreed that everyone should maintain peace”.

The meeting was well attended with several leaders from the Niger Delta region and Mr. Clark told reporters that even members of the Movement for the Emancipation of the Niger Delta, MEND, who were at the forefront of agitations from the region in recent years and who, disassociated themselves from PANDEF in a statement by its spokesperson, Jomo Gbomo were part of the meeting.

“MEND was in the meeting. Jomo Gbomo does not exist as a human being, he uses a ghost Name, a fake name. Other organizations were here. I am the leader of the Niger Delta and every leader you can think of from Cross River to Ondo State were all here today,” Mr. Clark said.

Speaking earlier, the Minister of State for Petroleum, Ibe Kachikwu, told reporters that the meeting discussed how far the government had gone in implementing the 16-point agenda of PANDEF.

Part of the 16 demands by PANDEF is the establishment of a maritime university, relocation of oil and gas companies to the Niger Delta, as well as allocation of oil blocs to people from area.

Mr. Kachikwu said ” several issues relating to the universities, the development of the region, amnesty programme, NDDC operations in the Niger Delta were discussed. It was very exhaustive, we looked at the 16-point agenda,” he said.

The petroleum minister said the atmosphere in the meeting was calm and friendly.

“They did in fact pledge their loyalty and their willingness to continue to work with us,” he said.