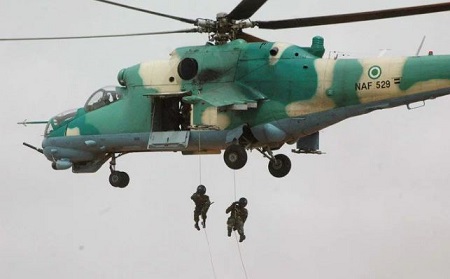 Nigerian Air Force
The Nigerian Air Force (NAF) on Tuesday raided Boko Haram hideouts in Sambisa forest and killed several insurgents, The Nation reports.
A statement issued by NAF Director of Public Relations and Information, Air Commodore Olatokunbo Adesanya, said few terrorists were seen evacuating the remains of dead Boko Haram fighters after the strikes.
The NAF statement which was supported with a video footage reads: “In furtherance of operations to completely defeat the Boko Haram Terrorists (BHT) Organization, on August 7, 2017, the Nigerian Air Force (NAF) Component of Operation Lafiya Dole conducted an Intelligence, Surveillance and Reconnaissance (ISR) mission over Parisu, in the Sambisa general area.
“During the ISR mission, a large group of Boko Haram Terrorists (BHTs) was seen converging under a tree close to a prominent zinc-roofed structure. Part of the structure was concealed by the foliage of a tree, making it a seemingly unobtrusive gathering point for the terrorists.
“A confirmatory ISR mission indicated that the structure was indeed a BHT hideout, housing a large number of terrorists. Accordingly, on August 8, 2017, the Air Component detailed fighter aircraft to strike the target in succession.
“Following the first and second strikes, the building was completely destroyed and the location was strafed during the third attack. The fourth attack was re-directed to a close by building, where BHT activity was also noticed.
“Subsequent Battle Damage Assessment revealed that the BHT hideout was completely reduced to rubble and several BHTs were killed while a few of them were seen evacuating the casualties.”
Tori.ng