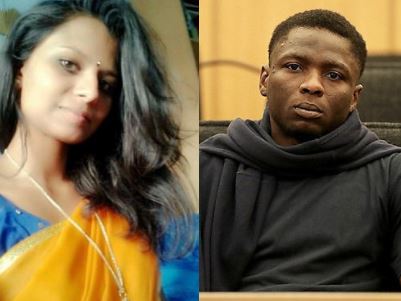 A 28-year old Nigerian man identified as Anthony seeking asylum in Germany under false pretenses is currently on trial for stabbing and killing his girlfriend earlier this year.

Prosecutors says he brutally murdered Soopika Paramanathan, a 22-year-old German student known locally as the “Angel of Ahaus” for her volunteer work with refugees.

Anthony allegedly attacked Paramanathan on February 11, 2017 after she ended their relationship, allegedly stabbing her repeatedly with a long knife in her head, neck and breasts. He was said to have stabbed her 22 times.

She sprayed his face with pepper spray in defence.

Anthony was stuffing her body into a large suitcase on the street when witnesses spotted him. He escaped from the crime scene and was caught by police in Basel, Switzerland two days later.

Paramanathan was rushed to a local hospital but later died after suffering substantial blood loss.

Anthony got to Germany in 2015, after spending three years in Italy. He wrote in his asylum application that he was forced to leave his country in 2012 for being homosexual and he had fought against the Islamic terrorist group Boko Haram in Nigeria. He is facing life imprisonment if found guilty on September 20.