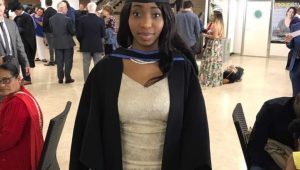 A Nigerian student has made history, setting record as one of a few ever First Class graduates from Aeronautical Engineering department of the University of Brighton, UK, reports Global Sentinel NG.

Hauwa Umar Usman, who was born and first educated in Kano, revealed she was diagnosed with dyslexia during the course of her study in the UK.

“During my studies in England, I experienced some challenges, which a British friend noticed were signs of dyslexia and suggested that I take a dyslexia test,” she said.

Dyslexia is a disorder characterised by having problems forming words correctly, having difficulty remembering or naming letters, numbers and colours, and in the early stage of a child it also involves difficulty in learning nursery rhymes or playing rhyming games.

People with dyslexia are generally identified by their difficulty in spelling, pronouncing, memorising, and summarizing stories. The symptoms also include difficulty in solving mathematical equations and learning foreign language.