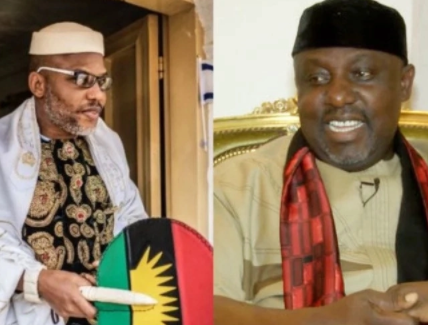 The indigenous People of Biafra IPOB, has reacted to a statement made by the Imo state governor, Rochas Okorocha, through his Chief Press Secretary, Sam Onwuemeodo, that the group is deceiving Igbos to start a war that would definitely be to their disadvantage.

Reacting to Okorocha’s statement, IPOB said IPOB nor its leader, Nnamdi Kanu are criminals or fraudsters that deceive people. The statement in part reads

“IPOB attention has been drawn to a publication credited to Rochas Okorocha, governor of IMO state through his Chief Press sec. Mr. Sam Onwuemeodo  on 14th Aug.2017 that Nnamdi Kanu and IPOB are deceiving Igbo with Biafra. Nnamdi Kanu and IPOB are not fraudsters or criminals, who acquired wealth through fraudulent means and illicit businesses before coming to power. Okorocha should know that we are fighting for freedom of our people and it is our human right to fight for freedom. It is also our right to seek for self determination. We are fighting for survival today in this contraption because the so called   leaders   have led us into slavery, death, economic marginalization   and other dehumanizing ways of living. It is unfortunate that when we talk about freedom through the ballot box, the likes of Okorocha would term it a call for war. I want to inform Okorocha that Nnamdi Kanu and IPOB are not ready to build bridges with those who killed over 3.5millions of our people and still killing us till date. We cannot build bridges with those who see a call for referendum as a call for war and see truth as hate speech. We cannot build any bridge with those who see us as objects or infidels and not as humans.”the statement read