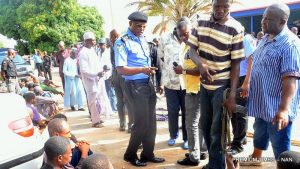 32 suspected kidnappers and armed robbery terrorising commuters on the Abuja-Kaduna highway have been apprehended by Operatives of the Nigeria Police.

They were arrested by the operatives of the ‘Operation Absolute Sanity’ deployed by the Inspector-General of Police, Ibrahim Idris, in the area about a week ago.

The Force spokesman, Jimoh Moshood, who paraded the men on Monday at Rijanah Divisional Police headquarters in Kaduna, explained that the first suspect, Mohammed Musa, was arrested at Gidan Busa in Kaduna while nine others were nabbed at Rijanah area of the state.

He stated that 14 of the suspects were picked up at Abuja-Kaduna highway while six others were arrested at Mararaban Jos, Aklibu village, and Birnin Gwari all in Kaduna State.

The police spokesman said, “Within the first week of the commencement of Operation Absolute Sanity, the suspects were arrested in their hideouts and the exhibits listed were recovered from them.

“They have made confessional statements indicating the various criminal roles they played in the commission of the crime. Most of them have been identified by some of their victims. They will soon be charged to court on completion of investigation.”

Moshood said the IG commended the communities and people in the towns and villages along the Abuja-Kaduna highway for their cooperation with the police personnel deployed for the operation.

“The IG, however, implored commuters, travellers and other road users to support the personnel in the discharge of their responsibilities and in the implementation of other crime prevention and control strategies of the Force,” he stated.