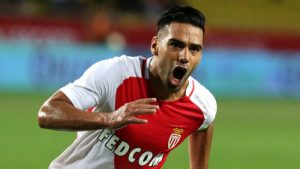 Radamel Falcao scored a hat-trick as Monaco, who left Kylian Mbappe on the bench, thrashed Dijon in Ligue 1.

A Sunday Times report has claimed that Mbappe, 18, has agreed to join Paris St-Germain in a deal that could exceed £200m.

He was not missed on the pitch as Falcao prodded home an opener and Jemerson’s bicycle kick made it 2-0.

Falcao then curled home a fine goal, and headed home in the second half after Wesley Said had pulled one back.

Mbappe, who scored 26 goals in all competitions last season, went off injured in the defending champions’ 3-2 win over Toulouse on the opening day.