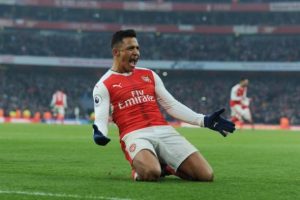 Manager of Arsenal, Arsene Wenger believes that the saga surrounding Alexis Sanchez transfer won’t be a distraction to Arsenal this season despite the Chile forward’s refusal to sign a new contract.

Man City, Chelsea, PSG, Bayern  and Juventus have all been linked with Sanchez, but Wenger appears determined to hold onto the 28-year-old for the last year of his deal in the hope he can persuade him to stay for the long-term.

Arsenal midfielders Mesut Ozil and Alex Oxlade-Chamberlain are also in the final years of their contracts, yet when Wenger was asked if he was concerned, he made it clear he expects his players to stay committed.

“When you are a player you perform until the last day of the contract. Do you really think you sit in the dressing room before a game and say ‘oh I’ve only got a year to go on my contract so I won’t play well’,” Wenger said.

Sanchez is out of contract at the end of the forthcoming season and he has shown no signs of accepting Arsenal’s offer of a lucrative new deal as he tries to engineer a transfer to a club in the Champions League.