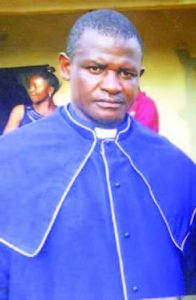 The National Headquarters of Evangelical Church Winning All (International) has been in confusion  following the abduction of its Christian Education Director, Rev. Jen Moses, by gunmen suspected to be Fulani herdsmen.

Although the details of the incident were still sketchy, Northern City News learnt that he was kidnapped on Friday evening between Jere and Bwari on the outskirts of the Federal Capital Territory while on an official meeting.

During the attack, his driver was shot and has been reportedly receiving treatment in Bwari hospital in Abuja, while the kidnappers have placed a call on the church and family members demanding N100m ransom.

The spokesperson of the FCT Police Command, Anjuguri Manzah, said he had yet to receive any report on the kidnap.

“We have not received any report of such an incident. Yes, at that end, Bwari is a very big point and the biggest town. So, oftentimes, people describe everywhere as Bwari which shares boundary with different states”, he stated.

But when contacted, the General Secretary of ECWA, Yunusa Nmadu, confirmed the abduction to Northern City News, saying the bandits had made a demand of N100m ransom.

He said, “The kidnappers were seven Fulani boys; they were below 20 years. The incident happened on Friday night between 8 and 9pm. Reverend Jen Moses was on his way from Jos to Abuja around Jere-Bwari Road. The kidnappers are demanding N100m ransom.

“The vehicle in which he was traveling was also seen on the checkpoint because his driver had a gunshot. The driver was advised to obtain police report before he was treated. I am aware that the incident was reported in a police station somewhere in Bwari Area Council.

“We will rather keep what we have been doing now to ourselves so that we don’t jeopardise investigation and efforts being made to secure his release. We will speak to the press after securing his release.”

Northern City News had reported that on May 10, armed robbers suspected to be Fulani herdsmen had attacked travellers on the ever-busy Jos-Keffi Expressway, carting away mobile phones and money from them.

The robbery took place at about 10am on the Expressway close to a village called Barde, after Gidan Waya in Kaduna State, a few kilometres from Jos, Plateau state capital.

The robbers, numbering about ten, with five of them wielding dangerous weapons, including guns and machetes, came from the bush, stopped vehicles and ordered passengers to lie face-down.