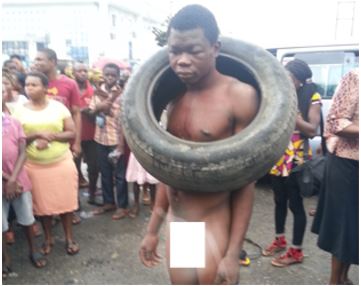 John Ator, a 25-year old Nigerian man who was allegedly caught stealing two basins of garri at the Calabar Marian market is said to have escaped while the mob was hunting for petrol to set him ablaze.

Ator who is accused to have formed the habit of stealing garri from the market was unlucky as he was caught in the act when the traders decided to lay ambush for him. One of the market managers said they decided to lay ambush to find out who the thief was “Ninety Nine days for the thief, and one day for the owner. That is the case with this young man, John Ator, who is now caught as a garri thief who has been a thorn in the flesh of garri women traders at Marian Market, Calabar as he was caught stealing two basins of garri in one of the shops in the market early hours of this morning (Wednesday), the man stated.

He continued to narrate further that this act of stealing garri has become a regular occurrence at the Marian market without knowing those behind the crime and it got to its peak when traders began suspecting one anther so the market authorities decided to lay ambush for the thief.

Fortunately for the traders the thief was caught and the traders angered by the action of the thief descended on him in their numbers, stripped him naked and hung a condemned tyre around his neck in readiness to roast him alive but the absence of fuel stalled their action. It was while waiting for fuel that the thief dramatically took to his heels and escaped into a nearby bush.

A search party was dispatched to comb the neighborhood to track him but could not locate him.