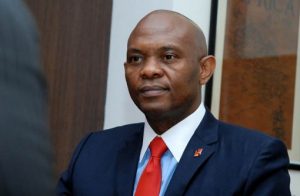 The Chairman, Heir Holdings, Mr Tony Elumelu, has decided to join forces with the  National Agency for the Prohibition of Trafficking in Persons (NAPTIP) on Thursday for accepting that his foundation would partner the agency in its fight against human trafficking in Nigeria.

Its Director-General, Julie Okah-Donli, gave the commendation when she paid Elumelu a courtesy visit in Lagos.

She said that more private sector operators needed to be reached to collaborate with the agency in executing its war against human trafficking.

“Between January and July of this year, we have witnessed a mass deportation of Nigerians from various countries including Libya. This has seriously drained our very lean budget.

“This year alone, over 2,000 Nigerians have been deported from Libya alone. It may interest you to note that we are expecting the deportation of no fewer than 540 Nigerians from Libya in three batches this August.

“The first batch of 180 will arrive in Lagos anytime from now. However, we can no longer wait for government alone to do this, hence, the visit to seek support for the agency and for the empowerment of the victims.

“Many victims are on standby, waiting for rehabilitation packages to be fully reintegrated into society. We are therefore constrained to run to you for support.

“We need provision of financial and logistics support including operational vehicles and work tools, sponsorship of some of the agency’s projects and programmes.

“We need to refurbish and rehabilitate our existing shelters, periodic provision of food, clothing and medical consumables and shelter to help victims.

“We need assistance in the development of standard skills’ acquisition centres in some strategic locations in Nigeria for training of vulnerable and indigent persons, as well as rescued victims.

“We also need education empowerment for victims, capacity development for personnel of the agency, sponsorship of awareness campaigns on the problem through various platforms including the media,” she told Elumelu.

On the achievements of the agency, she said it had recorded a number of milestones including the conviction of no fewer than 325 persons.

“Already, over 12,000 victims have passed through NAPTIP shelters and we have given psychological support, provided skills, education, medical supports, empowerment and reintegrated to their families and society.

“We have many victims who have graduated from tertiary institutions and in the last three weeks, two of such have graduated with one having a 2:1 in accounting under the sponsorship of NAPTIP,” she said

She said that despite these achievements, NAPTIP’s main challenge had been funding, adding that the crime of human trafficking according to the United Nations in terms of profit was third in ranking and coming next to drugs and gun running.

“It generates more than 150 billion dollars annually across the globe. However, the fund to fight it in Nigeria has been grossly inadequate,” she noted

Responding, Elumelu expressed pride at the elevation of Okah-Donli to head the agency, adding that she was once a product of the United Bank for Africa (UBA).

“She was our product in UBA, thus we are not surprised at what she has become. We have known she will get to this level because of the passion she has for stopping human trafficking.

“We support what you are doing and we stand behind you. The Tony Elumelu Foundation believes in the empowerment of our youths and they cannot be empowered if they are not free.

“We stand with you in eradicating human trafficking in Nigeria. We all engage more with you as you try to restore dignity to mankind and make sure our youths have self dignity and no one can take undue advantage of them.

“Selling of human parts is an ungodly act and it is despicable. I call on the Federal Government that started this good role to make more resources available to support you.

“Private companies pay tax to the Federal Government and we want to see a more judicious use of those tax paid,” he said.

He appealed to private organisations to join the agency to fight human trafficking, stressing that they needed to come onboard because they could vouch for the incumbent DG of NAPTIP.

“If she succeeds, we will all succeed. We will make sure our future leaders are not trafficked,” he said.