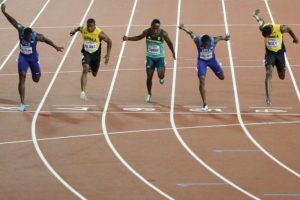 U.S. sprinter, Justin Gatlin defeated the fastest man in the World, Usain Bolt to claim gold in the World Athletics Championship in London.

Bolt who was running his last 100 meter race paid the price for a late start and he never recovered from the error as he came third in a time of 9.95.

Gatlin, who also was behind forced himself to the front to pull a stunner, winning the race in a time of 9.92 to claim the gold medal.

Christian Coleman also stunned Bolt as he claimed silver in a time of 9.94.

The race virtually ended Bolt’s dominance of the 100 meter race, but he is still by far the greatest Athlete of all time.

According to Tom Fordyce, Chief sports writer at London Stadium, 2015 was supposed to be Gatlin’s year to dethrone Bolt.

“He’s being booed through every round here. And now the man banned twice for drugs has taken his revenge. A party has officially been pooped,” he said.

Michael Johnson, 200 great and four-time Olympic gold medallist athlete on BBC TV said “I thought Bolt would be challenged but by Coleman not by Gatlin. Bolt was under pressure. He didn’t have to be here and you have to give him credit for putting himself out there and give people the chance to beat him.

“Two did beat him and I’m sure people are upset. I can guarantee you Bolt will not be upset. He is a competitor but he realises that life goes on.”