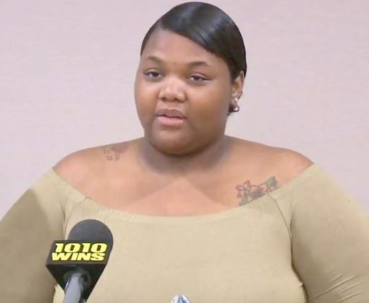 On Monday, a young lady named Quantasia Sharpton made allegations that she was exposed to herpes by R&B singer Usher on her 19th birthday. Now a friend of hers has come out to say that Quantasia is known for “finessing” celebrities, and sometimes even non-celebrities.

The guy did a Facebook Live interview where he called up Quantasia to ask her some questions about the celebrities linked to her and she let on quite a lot during the chat.

When the guy asked her about “finessing” August Alsina, she answered: “First of all, me and August was never like… it was never nothing. People made it seem like something it wasn’t. That was never my baby dad. I never said that. First of all, I never even had a crush on August to even look at him like that. He was messing with someone else I know so that was it though. SO I don’t know where they get this August s*** from.”

Speaking of her accusations against Usher, she insisted she was not lying against Usher and said she had evidence to prove he had sex with her. “If there wasn’t facts, Lisa Bloom would never have contacted me,” she said.

“Enjoying my last couple of hours as a regular girl,” she wrote in another post.

Watch her friend expose her in Facebook Live interview she granted…