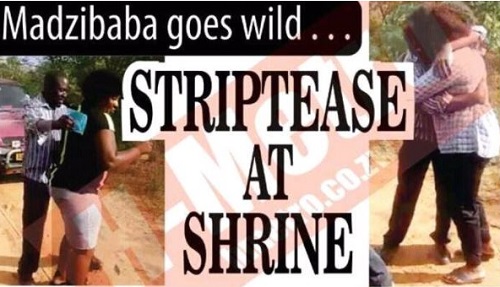 A 90-second video clip which was filmed at a ‘holy shrine’, belonging to a Gweru-based prophet in Zimbabwe, was recently turned into a guzzlers’ paradise with suspected s*x workers strip teasing and lap dancing for the man of God, has emerged online.

According to a report by H-Metro, the viral video of the bushy party involving the controversial Prophet, Madzibaba David Gozho, shows two parked cars including a red Toyota Rav 4 which was playing Jah Prayzah’s popular hit, Mdara Vachauya in the background.

The prophet who is a family man popularly known as Baba Takudzwa in the city of Progress, seemed happy in the company of his unidentified friend. The video also featured two unidentified bystanders who seem to be taken aback with the wild behavior of the so called man of God.

The self-styled prophet rose to fame after he was exposed for duping people with a tamed snake which he used to carry around for cleansing ceremonies. He would then demand money claiming he needed to go and burn it in Zambia.

The tricks were exposed by one of his tenants who told those who cared to listen that Madzibaba Gozho was using the same snake to dupe people of their hard earned cash. But despite the expose, he currently has a following of more than 200 people at his gathering.