A white woman once called me a dog — Olu Jacobs

Most fans of seasoned actor, Olu Jacobs, are aware that he cut his teeth in Britain in the 1960s. The records, at least, say that the man who recently turned 75 was trained at the prestigious Royal Academy of the Arts in London and featured in a lot of British theatre and film productions till he returned to Nigeria many years later. But, many of them do not know that he had to disobey his father to make the journey to that country. 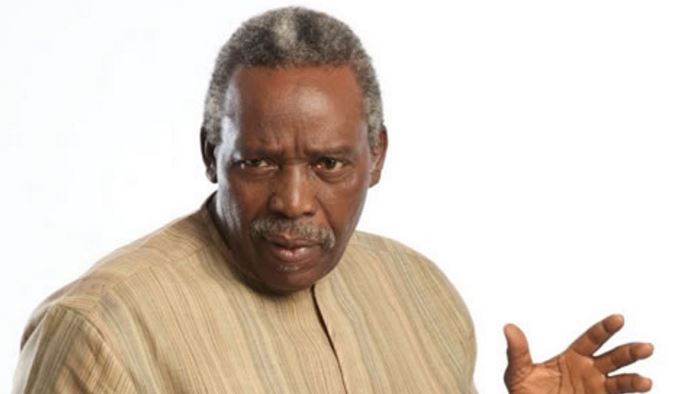 Jacobs, in an interview with our correspondent, described his father as the only obstacle that initially stood between him and a burning ambition to relocate to England and start a career in acting. He said, “My Dad did not want me to go to England. I was his favourite child. When I said that I wanted to act, he said I should do something else and not anything that would take me away from him.”

This may sound funny to a lot of Nigerians today, especially in these tough times that parents would do anything possible to send their children abroad in search of the proverbial Golden Fleece. But such was the bond between the actor and his father that the latter became scared of allowing him to settle in a foreign land.

However, the younger man was determined to have his way. So he conspired with his older brother who was already living in London and eventually arrived in that country in 1966. Even then, he had to do something to pacify his father and get back in his good books. “When I got to London, I had to send him a message. As the closest person to him in the family, I knew the right thing that would calm him was tobacco. My father loved tobacco. He was a piper. So I bought him a new pipe and some tobacco and sent them to him through somebody who was travelling home. And he forgave me for disobeying him,” he said.

Jacobs also explained that he chose Britain because he felt it was the right place to fulfil his ambition. “At that time, if you desired to do this job that we are doing in the arts, you had to go to either Europe or America. France was out of the question for me because I didn’t speak French. I still don’t speak French neither do I speak German or Russian. English was the language of communication that I knew and whatever I wanted to learn I preferred to do it in the language that I understood. And since we already had a relationship between Britain and Nigeria, it was much easier for me to go to England,” he said.

At a time most immigrants of African origin were having difficulty building a career or getting decent jobs, Jacobs was able to make it to the British arts scene with relative ease. Looking back at those days, he attributed it to good fortune. “Providence must have had a hand in it. I think good luck was following me everywhere I went. Back then, to become an actor in England, you must be able to have an equity card. The card was issued by the actors’ union in that country. To get the card, you must have a job. And to get a job, you must have an agent, ” he said.

But life in Britain was not entirely smooth for Jacobs. Although his acting career flourished and he was opportune to appear in some productions that also featured some of the best actors and actresses in the world, there were challenges. One of them was racism.

“I was a victim of racism all the time. You felt it in the way the people looked at you and in their attitude toward you. But you could not do anything about it. I could not take somebody to court for that,” the actor said.

Recalling an incident that occurred in the first year of his stay in London, he added, “A white woman once called me a dog. She had a vacant room for rent. But when I approached her, she asked if I didn’t see the ‘No dogs’ sign on her door. Before I could respond, she said that a dog was better than me and then slammed the door in my face. I felt so bad that I almost decided to return to Nigeria.”

Driven by patriotism and the desire to contribute to the growth of the arts and culture sector, Jacobs returned to Nigeria, 20 years later. He has been very active in the film industry.

Share
Facebook
Twitter
WhatsApp
Previous articleAlakija backs creative industry at Inside Out anniversary
Next articleSenate commended by Presidency for supporting Buhari’s stay in London
- Advertisement - Ad ==> TRUTH FINALLY OUT! Discover how a young Nigerian graduate now makes a consistent 40k per week doing a legitimate online business. You too can start yours now, click here!!!