Deolu
Tension has taken hold of about 350 workers at the National Assembly as sack grips them following moves to disengage them. 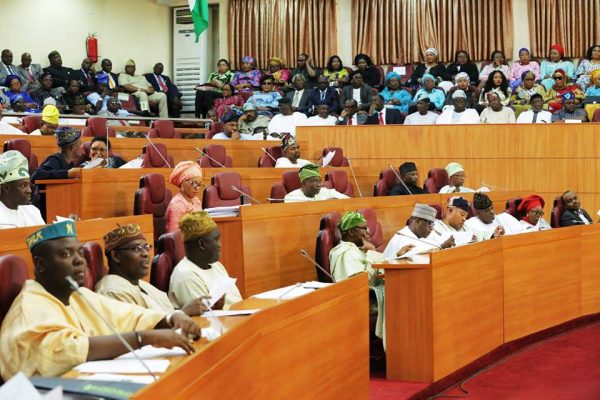 It has been revealed that no fewer than 350 workers of the National Assembly are now gripped by fears following moves by the authorities to disengage them over alleged questionable documentation.
According to The Nation, the authorities recently set up a panel to verify the documents provided by the affected persons for employment and determine whether they deserve to continue to be on the payroll of the legislature.
The panel concluded its assignment last Thursday and its report is now being expected.
It was gathered that the 350 workers were asked to appear before the panel for the purpose of updating their documentation.
The affected workers were identified following irregularities discovered in their records by the Staff Audit Committee.
The exercise was initiated by the management on account of bloated staff salary and mounting debt profile.
Sources said many of them may be sacked for allowing the issue to drag on for long having first been warned to regularise their documentation over five months ago.
“If this set of people are still having issues with their documents after five months of this exercise, then something is wrong somewhere,” a NASS source familiar with the matter said.
“This verification did not start yesterday, it started more than three months ago. The exercise is in phases, we are currently in the phase of table payment, having concluded the physical appearance and document presentation.
“The first phase of the verification exercise turned up several questions in which the appointment of a sizeable number of staff turned out to be questionable.
“The table payment of salary that began in April is a huge step in this effort because all of us have to collect our cheques physically.”
The source said many of the affected people have been giving different excuses for their inability to personally collect their salary cheques, apparently to avoid detection.
“As we speak, we are getting all kinds of excuses on why many of them could not turn up for their cheques since they can’t be collected through proxy.
“Unfortunately for them, that excuse will not hold water because documentary evidence is showing us that some were not properly recruited, many were not qualified for the designations they are claiming.
“Also, many have been discovered to have been redeployed elsewhere but still our NASS payroll.
“Even some have gone on study leave and are still drawing salary from NASS, while some that have concluded their study leave refused to return to their beat but chose to remain abroad and collect salary from NASS.
“These are the kind of people that are giving instructions to proxies to collect their cheques on their behalf.
“We are aware of all these and I believe appropriate action will be taken in that regard.”
For emphasis, the management through an internal memorandum released a list of 350 workers that must appear before the P.A. Giwa-led Staff Audit Committee with their appointments and other documents.
A two-page internal memo with Ref. No: NASS/AUDIT COMM./2017/33 dated 28th August, 2017 signed by its Secretary, Christopher Ashiekaa, directed the affected staff to appear before the committee for update of their records.
It reads: “The National Assembly staff Audit Committee is in the process of updating staff records.
“In this regard, the under listed staff are requested to kindly report in House of Representatives Room 1, to update their records.
“Please note that this process will be concluded on Thursday, 31st August, 2017”.
The names of the affected staff was pasted on the notice boards across the National Assembly complex.
While it was not clear if all 350 workers turned up for the exercise, the source however hinted that a sizeable number failed to meet the deadline.
“We are still collating figures but I can tell you that a huge number failed to turn up. The exercise has not ended yet, so let us see how it goes,” the source added.
In addition, workers deployed to principal officers’ offices and other legislators were also differently requested to appear before the Audit Committee for reconciliation of their records.
In a separate memo, it was noted that the reconciliation became necessary for documentation purposes, which may not be unconnected with the discovery that many took personal decision to deploy themselves to the offices of lawmaker of their choice without due process.
The Committee said it has become expedient to ensure that these staff are properly captured as bona fide staff of the National Assembly.
While warning all concerned staff to report to the Committee secretariat with all relevant documents for documentation, the panel  added that it would not be responsible for any staff whose name is deleted from the nominal roll for failure to update his or her record.
In another development, a renovation of the National Assembly complex is ongoing, preparatory to the September 19 resumption date of the lawmakers from their annual recess.
The multi-million naira renovation which  is the first since the exit of Julius Berger Plc in 2016, covers  a facelift for the lobby with a brand new ultra modern reception cubicle, painting, removal, replacement and redesign of the ceiling and lighting system as well as the cooling system along the corridors and offices in the White House.
The renovation of the office of the Clerk of the National Assembly had earlier been carried out, with the incumbent being the first occupant.
The project that was undertaken by the Federal Capital Territory Administration (FCTA) was initiated as a result of the gradual but steady collapse of the infrastructure of the White House.