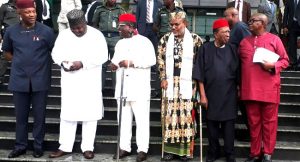 The South-east governors on Wednesday had a meeting with the leader of the Indigenous People Of Biafra, IPOB, Nnamdi Kanu ,at the Government House, Enugu.

According to reports, the governors told the IPOB leader during the meeting that the group’s demands ‘must not be absolute.’

The forum also promised to engage the entire leadership of IPOB in further dialogue to address their demands.

Mr. Kanu arrived Enugu Government House around 1.30 p.m. in the company of a constitutional lawyer, Ben Nwabueze, who is also the leader of Igbo Leaders of Thought, ILT, and Eliot Uko, deputy secretary of ILT.

The Chairman of the South-east Governors Forum and Governor of Ebonyi State, David Umahi; Enugu State Governor, Ifeanyi Ugwuanyi; and Anambra Deputy Governor, Nkem Okeke, were present at the meeting.

The Imo and Abia governors, Rochas Okorocha and Okezie Ikpeazu, were said to have travelled outside the county.

Mr. Umahi, who read the communiqué after the meeting, spoke on the outcome.

“The meeting agreed that these demands by IPOB should not be absolute, rather the South-east Governors shall immediately engage the leader of IPOB, Nnamdi Kanu, and the entire leadership of IPOB to further meetings and dialogue with a view to quickening the resolutions of all issues amicably,” Mr Umahi said briefly.

The meeting with the IPOB leader may not be unconnected with the recent move by the federal government to re-arrest him on alleged violations of his bail condition. Mr Kanu is currently on bail after being charged with alleged treasonable offences.

Mr. Kanu in a recent reaction dared the federal government to arrest him.