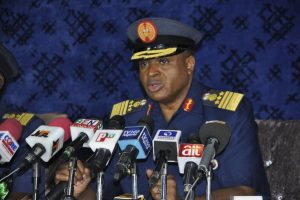 An attempt by Boko Haram to disrupt the peaceful Eid-el Kabir celebration in Borno was altered by the Nigerian Air Force.

This was mentioned by the Chief of Air Staff, Air Marshal Sadiq Abubakar,at a feast organized for officers and men of the service at the 105 Composite Group, Maiduguri.

Abubakar had held a grand feast for service men carrying out the counter-insurgency operation in the North-East, as part of the Eid-el Kabir celebration.

He disclosed that the Air Force in a joint operation with the army had destroyed insurgents’ hideouts thereby scuttling their plans to attack communities during the festivities.

“Boko Haram insurgents planned to destabilize the Sallah celebration, but with help of the Almighty Allah and our collective efforts, we foiled their plans.

“Our objective is to protect life and property, safeguard the national territorial integrity and make our communities safe so that farmers can go back to their settlements and cultivate their farmlands.

“We will remain in the forest to protect our people.

“The insurgents are on the run due to concerted military efforts; the only option left for them is to surrender,” he said.

Abubakar congratulated the men and officers of the service for their dedication and gallantry, saying that Nigerians were proud of their achievements.

The air chief disclosed that the Air Force command had accorded priority to training and improvement of the welfare of its personnel.

He added that arrangement had been concluded for the training of air force personnel within and outside the country, to strengthen defence operations.

“We are sending some service men for training in Jordan.

“We are committed to providing logistics, uniforms and ammunition to counter terrorism while construction of housing is in progress to provide decent accommodation for officers and men serving in the counter-insurgency campaign,” he added.

Abubakar urged officers and men of the service to remain disciplined, display high sense of professionalism and respect civilians in the discharge of their duties.

He also commended the people for their support to the service and called on them to provide useful information that would be helpful to the fight against Boko Haram.

Meanwhile, Lawali Babagana Ibrahim, the Ward Head of the Pompomari area of Maiduguri, has applauded the service for the successes recorded in the counter-insurgency campaign.

Ibrahim said the collaboration between the service and the vigilante group had helped to strengthen security in the area.

“The service donated two cows to the vigilante group to enable them to celebrate Sallah.

“There is mutual understanding between the service and the host community,” he said.

The Borno Deputy Governor, Usman Durkwa, had declared that this year’s Eid-el-Kabir celebration was the most peaceful the state had recorded in the past seven years.