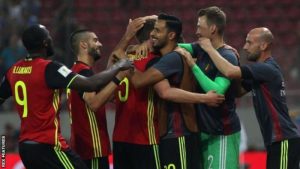 Goals from Jan Vertonghen and Romelu Lukaku gave Belgium victory in Greece to ensure they become the first European team to join Russia ahead of the 2018 World Cup.

All three goals came in a five-minute second-half period, which began with Vertonghen firing Belgium ahead.

Zeca brought Greece level soon after but Lukaku scored the final goal with a glancing header a minute later.

The Red Devils join Brazil, Mexico, Iran and Japan in qualifying for the World Cup, with Russia automatically getting a place as hosts.