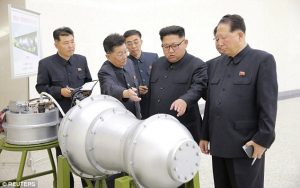 South Korea has responded to North Korea’s Sunday morning Nuclear missile test, by carrying out rounds of military drills on the Korean Peninsula aimed at proving to North Korean supreme leader, Kim Jong-un, that they could wipe out his country instantly if provoked.

Early Sunday morning, rogue state, North Korea, successfully tested a hydrogen bomb 10 times stronger than all previous tests. The 100 kiloton bomb – which is so powerful that it could vaporize an entire city.

According to a statement from the South Korean Joint Chiefs of Staff, the South Korean simulated military drill was carried out by the Army and Air Force and involved multiple F-15K fighter jets and surface-to-surface ballistic missiles- hitting targets off the country’s east coast to simulate a strike on North Korea’s nuclear test site.

”The joint exercise between the Army and the Air Force was a show of its willingness not only to wipe out the origin of the enemy attack but also the leadership and its supporting groups,” said Moon Sang-gyun, a spokesman for South Korea’s Defense Ministry.

South Korea’s military response comes hours after U.S president Donald Trump criticized the Asian nation’s government on Twitter, for trying to play ‘appeasement’ with North Korea, implying the North Korean government only understood the language of force not dialogue.
South Korea’s newly elected president, Moon Jae-in, has long campaigned for more cooperation with Pyongyang but his views might now change following their neighbors nuclear tests and criticism from major allies like the U.S.