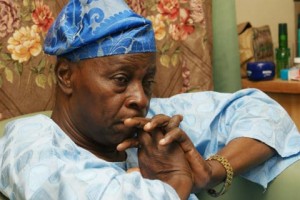 In the latest attack by herdsmen on the farm of former Secretary to the Government of the Federation, Olu Falae, last week, is false, according to the Ondo State Police Command.

The Fulani Herdsmen have been accused of the attack by the Yoruba socio-political group, Afenifere.

Mr. Falae was attacked and kidnapped in his farm along Igbatoro Road in September 2015 by herdsmen who had earlier repeatedly grazed with their cattle at the farm.

Those involved in the kidnap were subsequently arrested, tried and sentenced to life imprisonment by an Ondo State High Court.

Also in June this year, armed herdsmen invaded the farm and engaged police officers in exchange of gunfire, but were overpowered and chased away.

Afenifere raised a fresh alarm during its monthly meeting in Akure last week where it knocked President Muhammadu Buhari for his silence over the herdsmen’s repeated invasion of the farm of Mr. Falae and other farms in the South-west.

The group which spoke through its Publicity Secretary, Yinka Odumakin, said the herdsmen came and destroyed crops at the farm of the elder statesman before they were chased out by policemen on guard at the farm.

The Ondo Police Public Relations Officer, Femi Joseph, told reports that the report of another herdsmen invasion was incorrect.

According to him, the incident was not herdsmen invasion, but a case of theft in a farm owned by a tenant of Mr. Falae.

“The farmland belongs to Falae, but it was cultivated by someone who is using it on lease,” explained Mr. Joseph.

“A man came in there to steal the man’s yams and he has since been arrested. He will be charged to court for stealing.”

When reminded that Afenifere had announced another invasion by herdsmen, Mr. Femi said, “That is their own version; I am telling you the actual position of what happened.”

On efforts by the police to ensure Falae’s safety given repeated attacks on him and his farm by the herdsmen, Mr. Joseph said the Inspector General of Police had approved the deployment of police officers at the farm.

He also said Mr. Falae also has police orderlies as directed by the IGP, adding that the police would continue to provide adequate security, not only for Mr. Falae, but also for other citizens facing threats from the herdsmen.

“You know that the issue of herdsmen is a national challenge,” he said. “Falae may have received his own fair share of the problem.

“We are also tackling the problem by engaging the herdsmen in a dialogue and those who are trying to be stubborn are arrested and dealt with according to the law.”