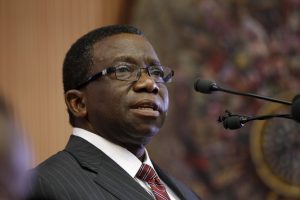 The National Association of Resident Doctors, NARD, have been appealed to by the Minister of Health, Isaac Adewole, to suspend their strike.

The resident doctors across Nigeria embarked on an indefinite nationwide strike on Monday, September 5, 2017  to compel the government to yield to their demands.

The President of NARD, Onyebueze John, in a communique released after an executive meeting of the association in the early hours of Monday, asked the doctors to proceed on the strike until their demands are met.

The minister in his appeal said the striking doctors should suspend the action in the interest of Nigerians who are in need of medical care.

The strike is expected to adversely affect healthcare in public secondary and tertiary hospitals in the country, particularly the teaching hospitals.

A press statement released by the ministry of health on Monday stated that the minister assured of the federal government ‘s commitment to address all the issues in contention.

Mr. Adewole said that the government needed a little more time to address all the issues.

According to him “another round of meeting has been scheduled for Wednesday, September 6, 2017 and it is hoped that more progress would have been made in reaching a consensus in all the issues being discussed.”

He also expressed the determination of the Buhari administration to promote industrial harmony in the health sector.