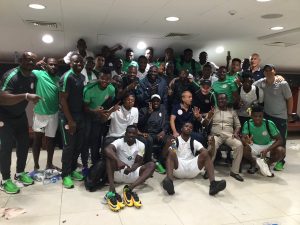 Vincent Aboubakar’s 75th minute penalty kick on Monday in Yaounde delayed  the party for the Super Eagles quest to qualify for the Russia 2018 World Cup.

Nigeria won the first leg 4-0 in  Uyo on Match Day 3, the Indomitable Lions needed to halt the Super Eagles’ stride which has placed them top of the group.

The hosts started brightly, holding down the visitors who however went on to warm themselves into the game and even go in front by the half hour through Simon.

While the Eagles continued to threaten to increase their lead through sporadic attacks from the flanks, it was however the Lions who took advantage of their seeming contentment.

With the Eagles dropping in pace, the hosts piled on the pressure to earn a penalty kick scored by Aboubakar in the 75th minute to the relief of the home fans.

As the game wore on to the end, and with the Lions appearing to have smelt blood with the equaliser, goalkeeper Ikechukwu Ezenwa had to do more to keep them at bay.

The News Agency of Nigeria (NAN) reports that the Eagles now have 10 points from four matches, having won their first three matches, and thus stay atop the group’s table.

Cameroon on the other hand stay in third place with three points from four matches, having drawn three games and lost one.

Zambia are in second place with four points from three matches, with one win and one one draw, and visit Algeria on Tuesday in their Match Day 4 fixture.

Algeria are in fourth place in the four-team group with one point from three matches, having drawn one game and lost two.

Nigeria can be closer to winning the group on Tuesday if Algeria beat Zambia, since no other team can upstage it with two Match Days remaining.

This will be if it can draw the Match Day 5 fixture at home to Zambia on October 7.

However, if Zambia beat Algeria on Tuesday to move to seven points, Match Day 6 fixture on November 6 will be the decider, even if Zambia secure an away draw on Match Day 5.

The qualifiers will end on November 6, with the group winners qualifying for Russia 2018.