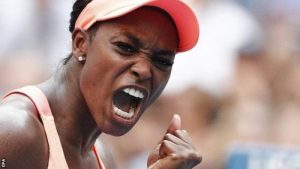 Stephens played superbly to come back from 3-1 down in the final set, converting her first match point with a brilliant backhand.

She will face compatriot Venus Williams or Petra Kvitova in the last four.

With Madison Keys and Coco Vandeweghe also through to the last eight, there is the prospect of an all-American semi-final line-up.

It is four years since Stephens made the Australian Open semi-finals, but her ranking had plummeted to 957th following an 11-month break with a foot injury.

Only two months later she is through to a Grand Slam semi-final and projected to break back into the world’s top 40, at least.

“This is just incredible. When I started my comeback at Wimbledon I could never have dreamed of this happening.

“Making the semi-final of my home Slam, it’s indescribable.”