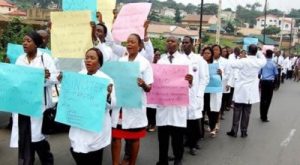 Resident doctors at University College Hospital (UCH), Ibadan, on Tuesday, decided to join their counterparts in the ongoing nationwide strike.

The decision was announced by the UCH branch President, Dr Olusegun Olaopa, in an interview with the News Agency of Nigeria (NAN) in Ibadan.

Olaopa said that the commencement of the strike was in compliance with directives by the umbrella body of the association in Abuja.

He said “the decision to embark on strike was in a directive from the NEC of the National Association of Resident Doctors (NARD) issued to state chapters.

“The circular was signed by Dr John Onyebueze, and Dr Aneke Emmanuel, National President and Secretary of National Association of Resident Doctors of Nigeria (NARD).”

Olaopa said that the NEC of NARD was meeting in Abuja to continue deliberations on next plan of action.

He described the strike as holistic as it affects all departments in UCH.

Resident doctors in UCH had on Jan. 6, embarked on one-day protest over non payments of November and December 2016 salaries.