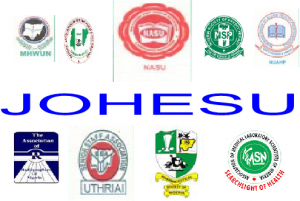 The Joint Health Sector Unions and Assembly of Health Care Professionals have issued a warning to the Federal government that it might be forced to embark on an indefinite strike, if the Federal Government fails to meet its  demands.

The group said on Friday that it would embark on an indefinite industrial action that would shut down operations in public hospitals due to the prolonged delay by the Federal Government in meeting its demands since 2014.

JOHESU makes up about 95 per cent of health workers and health care providers in the country.

In a letter written to the Senate President, Dr. Bukola Saraki, and the Speaker of the House of Representatives, Mr. Yakubu Dogara, the body, on Friday, threatened that if the Federal Government refused to address its agitations earnestly, it would have no option but to shut down health care facilities nationwide.

In its letter titled, “Looming nationwide industrial action: Request for audience,” and signed by the JOHESU National Chairman, Joy Josiah, and the National Secretary, Ekpebor Florence, the body warned that the Senate President and the Speaker of the House of Representatives should grant it audience on September 13 and 14 respectively by 10am or at any other date not later than a week before September 30.

The letter read, “We write on behalf of the leadership of Joint Health Sector Unions and Assembly of Health Care Professionals, a body which makes up about 95 per cent of health workers and health care providers, to seek for your intervention in the protracted demands and agitations between JOHESU and the Federal Government since 2014 by granting us urgent audience on Wednesday, September 13, at 10am or any other date not later than a week before September 30.

“We are compelled to seek for your intervention so as to avert indefinite industrial action in the health industry. We are aware of the sensitive and important nature of our service to human lives, hence our proactive measure in prevention rather than curative.

“JOHESU is aware of your recent laudable role in intervening and resolving of the issues of the medical doctors while they were on strike. While thanking you for your kind approval to meet with us on September 13, accept the assurances of our best wishes.”

Patients in federal hospitals are already lamenting even as relatives have started moving some to churches, traditionalists’ homes and private hospitals.

This is coming as the strike embarked upon by the National Association of Resident Doctors enters its fifth day.