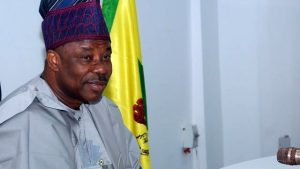 Governor of Ogun State, Ibikunle Amosun, has described the Minister for Women Affairs and Social Development, Aisha Alhassan’s  open declaration for the political aspiration of former Vice President Atiku Abubakar as a disappointment.

Speaking to journalists in Abeokuta on Saturday, Mr. Amosun, while saluting Mrs. Alhassan’s courage, said it was misplaced.

“Though she is entitled to her own opinion at any point in time, she should have just resigned her appointment because her loyalty cannot be in two places. Her falling short of resigning, takes everything away from what she said and it is clear that she will no longer be contributing to the development of the present administration,” he added.

Speaking on whether or not the president would run for 2019 Presidential election, the governor said, “the only thing that can prevent President Muhammadu Buhari from contesting is if his health cannot take it.

“If not for this present administration, only God knows where Nigeria would have been. When the government came on board, it was like jumping into the pool at the deep end,” the governor said.

He scored the federal government high in its fight against insurgency, insecurity, corruption as well as “efforts at economic recovery through serious diversification drive.‎”

The federal cabinet member, popularly called Mama Taraba, had during the week stirred the hornets’ nest when she said she would support the bid of the former vice president for the presidency in 2019 even if Mr. Buhari decides to recontest.

Her comments had subsequently drawn flak from two prominent members of her party, the All Progressive Congress, APC: the Kaduna State Governor, Nasir El-Rufai and the North-west chairman of the party, Inuwa Abdulkadir, who said she had never been a ‘Buhari supporter.’