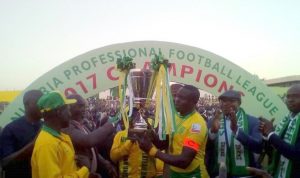 Aside from the giant trophy they lifted on Saturday, Plateau United also pocketed N50m having finished as champions.

They will represent Nigeria in next year’s CAF Champions League along with runners-up MFM FC, who lost 2-1 at El Kanemi Warriors.