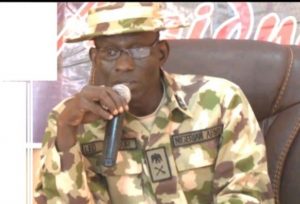 He said this when he paid an operational visit on the troops in Mora in Cameroon Republic.

Col. Mustapha Anka the MNJTF Information Officer stated this in a statement in Maiduguri on Monday.

Anka quoted the commander as promising additional support for the troops to enhance their operations.

“On arrival, the commander and his entourage were received by the Commander Sector 1 Brig.-Gen. Dobekreo who presented a detailed brief on the activities, achievements and prospects of the formation in the fight against terrorism and insurgency.

“In his response, Irabor thanked Dobekreo and his troop for the warm reception and detailed brief.

“He expressed happiness at the achievements and successes recorded by the formation and promised to give necessary support to the command.

“Irabor used the medium to appreciate the President of the Republic of Cameroon Paul Biya and other Presidents of the Lake Chad Basin Commission (LCBC) countries and Benin for their commitment, determination and purposeful leadership towards ensuring peace and security in the region”.

He said that the commander also commiserated with the Sector for the souls of those that paid the supreme sacrifice and wounded during the fight against terrorism.

“Irabor reiterated that terrorism required contributions of other agencies in order to maintain peace, security and harmony in the area.

“He also visited Maroua and paid a courtesy visit on the governor of the Far North Region.

“While at the Governor’s office, he was received by the Secretary General of the service of the governor of the region who welcomed him on behalf of the governor.”