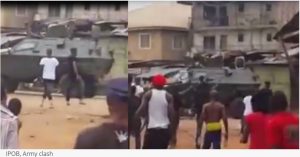 It said that the presence of the military through an operation known as Python Dance 11, was an invasion of the region and aimed at intimidating the people.

Ohanaeze stated this in a statement issued on Tuesday in Abuja and signed by its President General, Chief John Nwodo.

The Chief of Training and Operations of the Nigerian Army, Maj. Gen. D. D. Ahmadu, had on Friday, announced the setting up of the operation.
He said that Operation Python Dance II was going to take place in the five South Eastern States to address “assassinations, attack on security personnel, theft of weapons, violent agitations, armed banditry and kidnapping”.

But Nwodo disagreed, saying Nigeria at this moment did not need such deliberate escalation of tensions and crisis.

Nwodo said that rather than resort to the use of brute force in resolution of an issue of self determination, there were more civilised and established practices to resolve our democratic and security challenges.

He said that if the presence of the military which he alleged amounted to an act of intimidation was not discontinued immediately, he would be left with no alternative than to conclude that this is a containment policy aimed at the South-East.

He said it is to intimidate our people from freely expressing their anger and angst at their marginalisation and treatment as second class citizens.

Nwodo said, “In a democracy, the level of disenchantment expressed by the people of the South-East of Nigeria ought to have provoked a serious dialogue between our people and the Federal Executive and the Legislature.

“History teaches us that the continuous use of force to silence dissent and free speech will only accelerate the growth of dissent and dissatisfaction.

“Fundamental Rights of freedom of expression are critical for a successful democracy.”