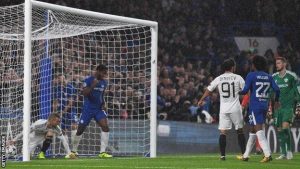 It was a great day for Chelsea’s latest addition, Davide Zappacosta who scored a screamer of a goal and Michy Batshuayi scored twice as Chelsea equalled their biggest Champions League win with a thrashing of competition debutants Qarabag.

The Blues – making their return to European competition having failed to qualify last season – rested several first-team players for the visit of the Azerbaijani champions, but still won with ease.

Pedro opened the scoring with a 20-yard curler from Willian’s lay-off.

Italy right-back Zappacosta, on his first Blues start, ran 50 yards down the right wing, before sending over a cross that flew past Ibrahim Sehic.

Cesar Azpilicueta headed home a third after the break from Cesc Fabregas’ cross.

Batshuayi then scored twice in the final 15 minutes – firing in from outside the box after being picked out in space by Bakayoko and then scrambling home Zappacosta’s cross.

The win was always likely to be the easiest game in the group, with Roma and Atletico Madrid the other two teams in Group C. Those sides drew 0-0 in Rome’s Olympic Stadium.