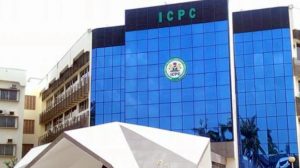 The Chairman of the Independent Corrupt Practices and Other Related Offences Commission, ( ICPC ), Ekpo Nta, has successfully bowed out of office after six years.

He handed over the mantle of leadership to Abdullahi Bako, who is a Board Member, who would be acting pending the assumption of duty by the chairman designate who is awaiting Senate confirmation.

In his address during the handing-over ceremony, the out-gone chairman stated that he came into the commission at a time when the commission had a crisis of identity as to whether it was a law enforcement or civil service organisation, coupled with the fact that its premises had a seemingly abandoned look in terms of how dilapidated the physical structure was.

He revealed that though the situation dampened his enthusiasm, it also spurred him into picking up the challenge of not leaving the commission the way he had found it.

Mr. Nta stated that the first task he and his board members set out to do was to rightfully place ICPC where it belonged based on the commission’s enabling law.

He highlighted some of his achievements to include a high rate of investigation and prosecution of corruption cases; the introduction of preventive measures to check corruption in Ministries, Departments and Agencies (MDAs); and the spike in publicity for the commission’s activities on its website and in the media.

Other achievements include; publishing of three volumes of ICPC law reports; improving the staff clinic to cater for the health of suspects in the commission’s custody as well as the intervention and support by UNODC for the commission’s work, amongst others.

The out-gone Chairman commended the management committee and staff of the commission for what he described as a wonderful working period, stating that the commission had intellectuals as staff who usually stood out at trainings and workshops featuring participants from other organisations.

He urged the management committee members to continue to work hard while emphasising the seriousness of the handing-over ceremony with its accompanying copious documentation, as an indication of a culture that helps to create institutional memory.

In his response, the Acting Chairman, Mr. Bako, acknowledged that Mr. Nta had done a lot to project a positive image for the commission. He noted that the achievements made Nta as Chairman ICPC, to be the first African to be appointed a Board Member of the International Anti-Corruption Academy, IACA, Vienna, Austria.

Mr. Bako pleaded for the support of the management within the period he would act as chairman while urging all staff to continue to be disciplined, and build on what they had learnt from the out-gone chairman by striving for excellence.

Mr. Ekpo Nta was appointed Acting Chairman, ICPC by former President Goodluck Jonathan at the swearing-in ceremony of the commission’s board members in November 2011 before he became the substantive chairman in 2012 for a period of five years.

Mr. Bako, a current two-term member of the ICPC Board, is a lawyer, Notary Public and Fellow of Charted Institute of Arbitration.

The acting chairman, who represents the North–east geopolitical zone, was first appointed a board member of the commission in 2009 and the appointment was renewed for a second term in 2014.