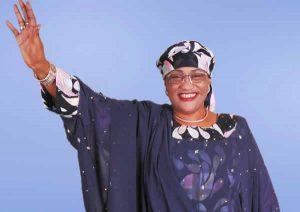 The Minister of Women Affairs, Senator Aisha Alhassan, was on Thursday invited by the National Working Committee of the All Progressives Congress to defend the controversial comments she made about whom she would support for the 2019 presidential election.

The minister, who arrived at the APC National Secretariat at about 2pm, held a closed-door meeting with the Chief John Odigie-Oyegun-led NWC until 4pm.

Aisha told newsmen she could not speak on what transpired at the meeting since the party’s National Publicity Secretary, Mallam Bolaji Abdullahi, was available.

Abdullahi, who spoke to reporters shortly after seeing the minister off to her vehicle, confirmed that the minister was at the secretariat to respond to issues relating to a series of controversial comments she made about the 2019 presidential election.

The party spokesman said the party leadership refrained from making official comments on the issue because it felt it was only proper to hear her side of the story before taking a position.

Abdullahi further explained that the party leadership agreed that there was nothing wrong with her decision to declare support for another member of the party.

It, however, queried what it described as her “indiscretion” considering the time she made the comment.

Abdullahi said, “Since the issue of the comment she made came up, the party has not said anything regardless of what individuals might have told you because we are a party that recognises the right of her members to express their opinions.

“We also had an opportunity to discuss with the minister to understand what she said and in what context she said so before we know how to respond.

“So, when she came, we asked her to explain to us what truly transpired and in what context she said what she said and she did offer these explanations.

“However, as a senior member of this party, her statements represent an act of indiscretion because with the kind of position she occupies even within the party, she is a party leader in her own right, what she said was not what she was supposed to say at the time that she said it.

“She ought to have exercised greater judgment than she did and she acknowledged that maybe the timing was wrong; and she apologised.”

The party spokesman stressed that nobody questioned her right to take the position she had taken because she had the right to support whoever she wanted to support.

He noted that this was even more so that the person she declared support for was a member of the party.

Asked if Allhassan was advised to resign her appointment, Abdullahi said, “No. That did not come up. What we just said was that we understand the context in which she said what she said, but it was an act of indiscretion for someone occupying the position she is occupying in the party to make that kind of statement.

“If this was 2018 and the people have filed their applications to say they are contesting and she now comes out and says she is supporting this person, how can that be an issue? But we are still in 2017.

He, however, refrained from making any comments with respect to recent comments made by former Vice-President Atiku Abubakar.