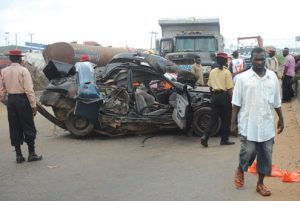 30 lives were lost on Thursday night in auto crash accident on the Lagos-Ibadan highway, according to the spokesman for the Federal Road Safety Corps, Mr Bisi Kazeem, confirmed the incident to newsmen in Abuja on Friday.

Kazeem said the accident occurred at about 8pm at Km 95 around the Elebolo Quary Area on the Ibadan axis of the road.

According to him, 10 other persons were injured in the crash involving 40 persons and two Mazda buses.

“The crash occurred at a construction site, and it resulted from route and speed violations.

“This has further underscored the Corps Marshal, Dr Boboye Oyeyemi’s advice to motorists to avoid night journeys, be careful around construction sites and drive within approved speed limits,” he said.

Kazeem said rescue operations by the FRSC officials, who arrived at the scene minutes after the incident, ended at 2:42am on Friday.

He disclosed that the corpses were deposited at Adeoyo Yemetu Hospital mortuary, Ibadan.

The injured were taken to the University College Hospital, Ibadan, and Adeoyo Yemetu Hospital, he added.