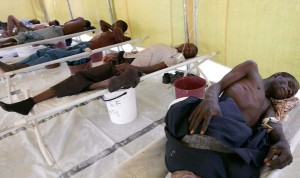 The Borno State Government confirmed on Thursday that it will vaccinate adults and children in the state against cholera outbreak, this was confirmed by the Commissioner for Health, Dr. Haruna Mshelia, made the disclosure at a press conference in Maiduguri.

Mshelia said that the maiden cholera immunization exercise would commence on Sept. 18, in areas worst affected by the disease.

“We have in stock about 950,000 doses of oral cholera vaccines. The exercise is the first of its kind in the state.

“The vaccines will be administered to children of age one and above including adults.

“The outbreak started in August and it continued till now,” he said.

He disclosed that some 1, 925 suspected cases of the disease were recorded while 44 persons died in the outbreak.

The commissioner explained that most of the patients were treated and discharged at the Cholera Treatment Units (CTU) and Oral Rehydration Therapy points (ORT) set up in the affected areas.

“Most of those who died reported to the clinics late or died at home. It is not all the deaths that were due to cholera.

“Most of the patients were treated for diarrhea and vomiting,” he said.

Mshelia added that the state government in collaboration with the World Health Organization (WHO), Medicins Sans Frontieres (MSF) and other organizations had adopted proactive measures to control the disease.

The commissioner disclosed that the government had scaled up activities to contain the disease and embarked on sensitization activities to promote good environmental and personal hygiene habits in the communities.

“We embarked on social mobilization activities to create awareness and enlighten the public on the need to keep a clean environment, wash hands before eating and after visiting the toilet.

“We also distributed chlorine tablets and advised people not to drink water from sources they were not sure of if you are not sure of the source of water you should boil it, clean your surroundings and cover your toilets.

“In fact, these measures are even more important to block the sources of infection.”

Mshelia reiterated government’s commitment to contain the spread of the disease and enhance health care delivery in the state.