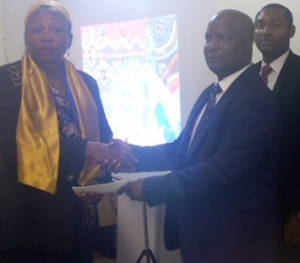 The suspects: Cyril Ameh Idakwoji, a staff of Access Bank plc who was the Account Officer of the school, Boma Obama Chisom, who posed as the Customer Relations Officer of the bank and Aderemi Adebayo Moses another accomplice who prints fake documents, allegedly diverted a sum of over N37,000,000( Thirty-seven Million Naira only) belonging to the school and thereby threw it into financial difficulties.

The money was presented to the proprietress yesterday September 15th.