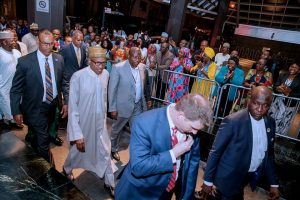 The Indigenous People of Biafra, ( IPOB ) led by Nnamdi Kanu, has planned to humiliate President Muhammadu Buhari, when he speaks at the United Nations General Assembly, UNGA, in New York, the Coalition of Northern Groups, (CNG ).

The group made the allegation through a statement on Sunday by its spokesperson, Abdul-Azeez Suleiman.

President Buhari left Nigeria on Sunday to join other world leaders at the 72nd Session of the UNGA.

The northern group said the alleged plan by the separatist group was intended to provoke northerners in Nigeria and incite the world against the Nigerian leader and his government.

The group however hailed the South-east governors for denouncing IPOB after it was declared a terrorist group by the Nigeria military, saying it has been vindicated by the declarations.

CNG also commended the Abia, Rivers and Plateau state governments for checking members of IPOB who it said wanted to set Nigeria on the war path.

“We must state here that our position that IPOB be proscribed, its activities be declared as acts of terror, and its leaders be accordingly treated in the interest of a greater, peaceful and united Nigeria has to a large extent been vindicated, which is also reassuring and encouraging,” the group said.

“We also wish to state that we have a privileged information that IPOB sponsors are mobilizing their members in the Diaspora to humiliate our dear President Muhammadu Buhari in New York where he is billed to address the United Nations General Assembly.

“We call on Nigerians to as well overlook this planned unpatriotic action by the IPOB supporters as it is nothing but another antic to provoke reactions.

“We assure all peace loving Nigerians that CNG is also preparing to counter IPOB’s foreign propaganda efforts by compiling relevant facts to be presented personally to the UN soon.

“Finally, we reiterate the call for calm and tolerance as the authorities diligently carry out their duties.”