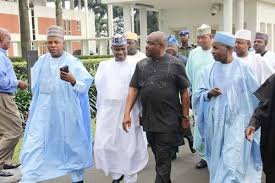 A selected  delegation of the Northern Governors’ Forum, on Monday, visited the South-East states and Rivers State Governor, Chief Nyesom Wike, to help curb the unrest between the Easterners and Northerners in Abia State, and to help ensure that a repetition of such incident does not happen in other parts of the country.

Members of the Indigenous People of Biafra on the Hausa community in some parts of the country, the governors said no law-abiding Nigerian deserved to be punished as a result of where he resided.

The northern governors, who hailed Wike for taking urgent steps that led to the protection of Nigerians living in the state, made reference to the clashes that erupted in the Oyigbo Local Government Area of Rivers State.

Shettima stated, “Governor Wike, we are mightily proud of you. We are mightily associating ourselves with you. Nigeria is greater than political differences. We belong to one political family and that is the Federal Republic of Nigeria.

“No interest should be bigger than the Federal Republic of Nigeria. You believe in the Nigerian Project. For that, we remain eternally grateful. In spite of what has happened in Abia State, steps have been put in place to ensure there is no retaliatory attack in any part of the country.”

Wike promised that he would continue to protect all Nigerians and foreigners living in the state.

The governor added, “Rivers State believes in the unity of this country. Rivers State will not be part of those calling for the disintegration of Nigeria. We owe it as a duty to protect every Nigerian living in the state.

“I will not allow any group to intimidate, harass or attack other Nigerians living in the state. We are Rivers people and we belong to the Niger Delta.”

Explaining that violence can never lead to the resolution of any grievances, Wike urged aggrieved persons to embrace dialogue in the interest of peace and development.

He added that the people of Rivers State had their own peculiar grievances against developmental issues in the country, pointing out that as governor, he had raised such issues, but would never support disintegration.

Also, during the visit of the northern governors to Abia State Governor, Okezie Ikpeazu, on Monday, Shettima said no part of Nigeria could comfortably accommodate Nigerians in the event of any major crisis in the country.

Speaking in Umuahia during the visit, Shettima stated that the northern governors had faith in the unity of Nigeria.

He added that some of the governors, who had served in the National Assembly, had mixed with people from different parts of the country and had built a coalition across the country.

He stated, “We are here on behalf of northern governors to commend Governor Ikpeazu for his high quality leadership in handling the crisis in Abia.

“We are here to show solidarity. We have a moral obligation to ensure that Nigeria remain one. Nigeria is the largest conglomeration of black people in Africa and we cannot afford to separate.

‘‘If we separate, where do we go? North is the Sahara Desert and Chad cannot contain us. If we go South, it is the Atlantic Ocean; south is too small for us and the mountains of East Africa, with their so many challenges, cannot accommodate us.

“We are here to remind Nigerians that we are better as one. We are here to also invite our South-East colleagues to come to the flashpoints of the North to speak to Ndigbo living in the North.”

Ikpeazu hailed the northern governors for identifying with Abia residents and other Nigeria living in the state during the crisis period.

He pointed out that normalcy had returned to the state, saying Muslims had peaceful worship in mosques on Friday.

Ikpeazu added that just as in Jos, the curfew in the state would run from 10pm to 6am.

He said, “I am delighted by this show of solidarity by our brothers from the North. When this crisis started, I asked myself: what will my brother, Tambuwal in Sokoto, do if he is in my shoes or Shettima of Borno?

“We are one and I want to assure you that the security of all Abia residents, both indigenes are non-indigenes, are guaranteed. We cannot allow a few people to separate us.”

Meanwhile, IPOB, on Monday, asked the Federal Government to produce its leader, Nnamdi Kanu, who they claimed had been missing since soldiers invaded his residence in Umuahia.

The group said the Nigerian Army might have arrested or killed Kanu and his parents.

The IPOB, in a statement by its spokesman, Emma Powerful, equally alleged that the whereabouts of Kanu’s parents were unknown.

Powerful said Kanu’s parents had been missing since the alleged invasion of the family’s residence by soldiers.

The secessionists insinuated that Kanu and his parents might have been killed by the soldiers or detained in an unknown location.

He added, “We, the family of the Indigenous People of Biafra and its leadership worldwide, under the command and leadership of Mazi Nnamdi Kanu, wish to bring to the notice of the whole world that the whereabouts of our leader, Mazi Nnamdi Kanu, and parents are still unknown to mankind since the attack on his compound last week.

“IPOB have been searching for our leader, Mazi Nnamdi Kanu, and his parents, who are nowhere to be found since last week.

“We are challenging the Nigerian Army and police to produce our leader since it is a prerogative right for him to make statement informing his confidants and teeming members all over the world about his condition.

“The Nigerian government knows the whereabouts of our leader, whether he is alive or dead, because the army has done the job they (personnel) were sent to do at Isiama, Afaraukwu Ibeku in Umuahia, Abia State, which was to kill Kanu and other members of the family.

“We were reliably informed that the Nigerian Army picked up Nnamdi Kanu, his father and mother within the time of the attack.

“We have gone so deep in search of our leader, Mazi Nnamdi Kanu, but he is nowhere to be found.

“It is high time the whole world asked questions about Nnamdi Kanu’s whereabouts because members of Kanu’s family were inside the compound during the attack.”

Powerful also claimed that 22 IPOB members were killed during the alleged attack on Kanu’s residence.

IPOB, which stressed that Kanu was ready to attend the next hearing in his ongoing trial in Abuja in October, wondered whether the Federal Government had made good its plan to re-arrest him without first obtaining a court order.