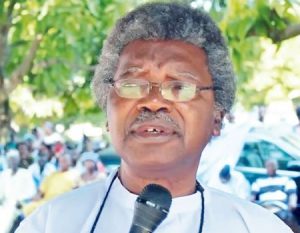 The Federal Government has been advised by the Northern Elders Forum (NEF) to investigate recent reports of importation of arms into the country and prosecute persons behind it.

Leader of the forum, Dr Paul Unongo, made the call at a news conference on Thursday in Abuja, said that there was need for all stakeholders to be more vigilant to checkmate the trend.

‘The alarming reports of illegal importation of huge quantities of arms into the country is disconcerting to the NEF.

”All governments and citizens must be more vigilant, firm and decisive in dealing with national security challenges. All governments from local, state and Federal, must protect Nigerians,” he said.

Unongo commended northern leaders, represented by its 19 state governors, and Senators, for their restrained and matured in spite of provocations.

He said that ongoing agitation in parts of the country triggered the provocations, and said that it was the responsibility of governments across the world to protect lives and property of their citizens.

He also commended the Federal Government for its readiness to take necessary measures as permitted in the Constitution to check all threats to the country´s peace and security.

Unongo urged groups in the country to maintain that to bring to justice any group that threatened national security was a sacred duty of government.

He said that the forum welcomed the presence of the military and other security personnel in any part of the country where peace and security were threatened.

´´The President has the prerogative of deploying the armed forces for the purpose of keeping peace; this prerogative should be respected by all Nigerians,´´ he said.

He, however, welcomed and commended the decision by South-East governors to denounce the activities of the Indigenous People of Biafra (IPOB), and its proscription in their respective states.

Unongo called on the Attorney-General of the Federation and relevant judicial authorities to continue to uphold the rule of law without fear or favour.

He added that the forum on its part should remain vigilant over the security and welfare of northerners in the South-East, South-South and other parts of the country.

According him, the north has been victim of terrorism over the years, and recognised the outline of an emerging terrorism now emerging in the South-East.

He added that northern leaders would not sit idle and watch the nation sink into chaos under new and additional threats.

Unongo said it was in this regard that the forum strongly supported Federal Government´s proclamation and proscription of IPOB and its activities in the country.

He reiterated that there were no issues of disagreement and demands by individuals and groups in the country or anywhere in the world that dialogue could not be resolved.

´´We the citizens of Nigeria are capable of resolving issues internally, the north recognises and acknowledges that there are demanding and legitimate questions on the current operations of the Nigerian state.

´´The north has very clear ideas on all issues and positions that the nation sees as challenges and is willing to dialogue on all of them,” Unongo said