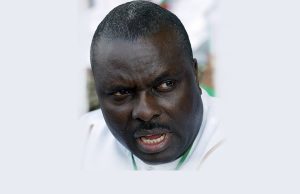 It was learnt that after the EFCC invited him, the commission was asked to invite the senator by writing through the Clerk of the National Assembly.

“Despite following the process, the senator has refused to come to our office for interrogation,” a source at the EFCC said.

Nwaoboshi, who has been linked to the misapplication of a N1.2bn bank loan, has also been accused of a N1.5bn contract scam involving the Delta State Government.

A detective at the EFCC told one of  our correspondents that in 2014, the lawmaker, through his company, Bilderberg Enterprises Limited, received a contract of N1.5bn to supply brand new construction equipment to the Delta State Direct Labour Agency.

However, the lawmaker allegedly supplied the state government with used goods and passed them off as new.

As part of investigations, the EFCC was said to have written the Nigeria Customs Service to verify if the equipment were new or not.

In a letter sighted by one of our correspondents, Customs noted that the equipment, including trucks, which were imported were merely refurbished.

The building, which belonged to the Delta State Government, was bought at the cost of N805m.

A Federal High Court in Lagos had in April ordered the temporary forfeiture of the building.

Joined with Nwaoboshi in the application were his two companies – Golden Touch Construction Project Limited, and Bilderberg Enterprises Limited.

In a related development, the senator has also been linked to a N1.2bn bank loan scam.

Sources said as a member of the board of Nexim Bank in 2014, Nwaoboshi was granted a loan of N1.2bn under the Local Industrial Growth Scheme.

The money was meant for the purchase of equipment and electrical materials but the senator allegedly diverted part of the funds to acquire properties in Lagos.

When contacted, Nwaoboshi neither denied nor confirmed the invitations. He however stated that it would be prejudice for him to speak on the matter as it was before a court.