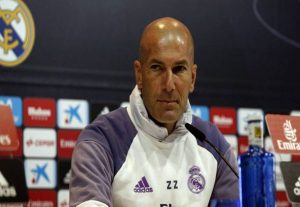 The Frenchman, however, is under pressure at the Bernabeu with Real struggling to get their domestic campaign off to a flier.

Los Blancos slipped to a disappointing 1-0 defeat to Real Betis last night, in a result that sees them sit seven points behind Barcelona after just five games.

Yet, should he be axed or decide to leave, then Spanish newspaper El Confidencial says Zidane could be in line to take the reins at PSG.

It is claimed that the Ligue 1 giants were close to sacking current boss Emery over the summer.

PSG, despite possessing a 49-goal striker in Edinson Cavani last term, lost out on the title to Monaco, who scooped the prize for the first time since 2000.

But, after seeing Zidane scoop domestic and European glory with Real last term, Al-Khelaifi has set his sights on the Frenchman.