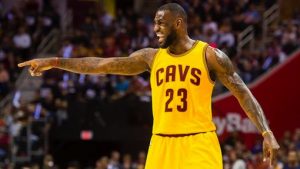 NBA Super star LeBron James has described US President Donald Trump as a “bum” over comments he made about fellow player Steph Curry.

Trump said the Golden State Warriors were no longer invited to the White House after star player Curry, 29, said he did not want to attend.

“Going to White House was an honour until you showed up,” James, 32, said.

On Friday, Trump said NFL players who protest during the national anthem should be sacked.

‘We don’t stand for the things he’s said’

BBC Sports reports that basketball’s champion team, the Golden State Warriors from California, were considering turning down the traditional invitation to celebrate their NBA title success at the White House.

Warriors point guard Curry, a two-time winner of the NBA’s Most Valuable Player award, said the team could “inspire some change” by refusing to visit the home of the president.

He added: “I don’t think us not going to the White House is going to miraculously make everything better, but this is my opportunity to voice that.”

Trump responded by tweeting that the invitation had been withdrawn.

The Warriors later said they will travel to Washington in February without a presidential invite to “celebrate equality, diversity and inclusion”.