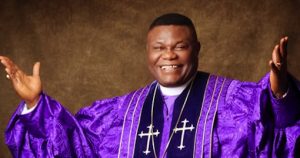 The General overseer of The Redeemed Evangelical Mission (TREM) , Bishop Mike Okonkwo has frowned at the  deployment of soldiers to the Southeast by President Muhammadu Buhari to curtail the activities of the Indigenous People of Biafra (IPOB) was not right.

Speaking with the Vanguard newspaper in an interview, the TREM General Overseer admitted that agitations will always happen, but insisted the solution was not resorting to violence.

The respected cleric also criticized Buhari’s advisers and queried the recent NNPC appointments, among other things.

He said: “We should not use violence to resolve our differences. Agitations like the one we have in the South-East will come but the solution is not moving armoured tanks there.

“Like I said, these are not the days you use force or instruments of government to intimidate people because there are those who are willing to die. We should go to the negotiation table to resolve naughty issues. Take for instance recent appointments in the NNPC, why will people not agitate? This is one of the issues that make people agitate. You can’t give 10 slots to the North, three to the South-West, two to the South-South and nothing to the East and you want them to sleep. And you want Nnamdi Kalu not to talk again.

“At times, I ask myself: who are the people giving advice to government? Why are they giving such advice? I just heard of a rail project being built from Kano to Daura. What is the economic benefit of that project? We can understand the one from Kaduna to Abuja…because people who live in Kaduna can commute to Abuja daily to work.

“But in this case, show me the economic benefit of spending such billions to develop a rail from Kano to Daura? The states that generate these funds, we don’t have roads that connect them, how much more airport. The Asaba airport was built by the state government, not the Federal Government. The states that generate the funds do not have airports, no roads and you want them not to agitate? What’s really wrong? Is somebody playing games with people’s minds? Such things are not acceptable.”