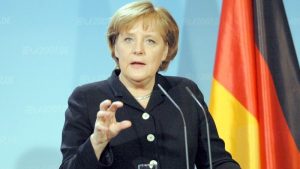 Angela Merkel, has been elected for a fourth term as German Chancellor, Ms. Merkel’s party, CDU, polled the largest percentage of votes with 32.9 per cent, the BBC reports.

The CDU’s current local partner, SPD, polled about 20.8 per cent while the nationalist AfD polled about 13.1 per cent to come third.

Ms. Merkel, who has been in office for 12 years, has reacted to her victory saying she had hoped for a better result.