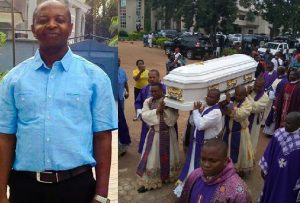 The Catholic priest identified as Reverend Father Cyriacus Onunkwo, who was kidnapped and murdered, was buried on Monday in Imo State.

A requiem mass was held at the Holy Trinity Cathedral, Orlu for the Reverend before he was finally laid to rest . In attendance was the state Governor, Rochas Okorocha, the Deputy Governor, Eze Madumere, the Imo State Commissioner of Police, Mr. Chris Ezike, Director of Department of State Services, Mr. Denga Abdullahi and a large number of Catholic priests including reverend sisters.

The clergy was kidnapped from his vehicle in Orlu town in Orlu Local Government Area on the 1st of September while he was travelling home to arrange for his father’s funeral. Following a manhunt, his corpse was discovered in a bush in Omuma Village after he reportedly suffocated to death in the car booth of the kidnappers.

Some suspects have been arrested, including a former police officer in connection with the kidnap and murder of the clergy.

May his soul and that of his father, rest in peace (Amen)