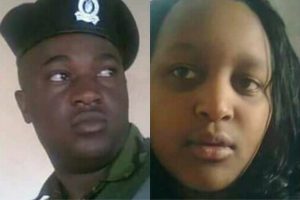 A police officer in Nakuru County, Kenya, identified as Stephen Mungai Kinuthia has shot his girlfriend dead with AK47 before taking his life with the same rifle at their home, CitizenTV report.

An eyewitness, told CitizenTV: “I was with the caretaker when we heard a man fighting with the wife and the man was striking her with canes, and as we were going to help, we heard gun shots and stayed put.”

Also speaking from the crime scene of the incident, neighbors said they heard a child shouting “baba anaua mama!” meaning, ‘father is killing mother’ before gunshots rented the air.

According to neighbors, the woman had only lived in the apartment for two weeks. The County’s Police Public Relations Officer, PPRO, Nakuru OCPD, Joshua Omukatta, told the TV station that the police had started a probe to establish what transpired.