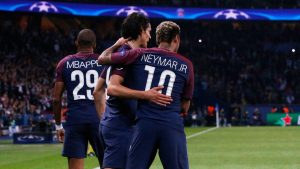 Paris St-Germain thrash Bayern Munich 3-0 in one of the Champions League matches played on Wednesday to go top of Group B with 3 points.

Dani Alves got the opener for the french champions after just 84 seconds following a great run and pass by Neymar.

Alphonse Areola produced a flying save to deny Javi Martinez an equaliser before PSG sealed the points.

BBC Sports reports that Edinson Cavani’s first-time shot doubled the lead before Neymar made it 3-0 from close range.

In the other Group B game, q Celtic won 3-0 away to Anderlecht and are level on points with Bayern.